Reflections on a
dry land

OH that it would rain! I admit to not
knowing a whole lot about sheep and
cattle and seasonal crops but I have
been a person for sixty years and
farming people vocationally for thirty
years of my working life. I hope that
doesn't sound inappropriate and if it
does please forgive me. But like a
farmer who hates to see his stock in
poor condition I am a person who
hates to see any of God's people in
similar condition. Sadly, those two go
hand in hand in times of drought.

There are some unassailable truths
about Christianity that are worth
considering in times when the less
fragrant realities of life make it pretty
dry and it's not just the animals that
need a drink. Two immediately come
to mind.

For a start suffering often educates
the self-sufficient person that we are
not sufficient. It is as though God
wired the world in such a way as to
remind us of this. In fact, that is

precisely what God did and frankly the
wisdom of this protects us from
ourselves becoming self-made gods
that others have to fight with. Like
one's stock is dependent on the
farmer, so we are dependent upon
God. We may not like to admit that we
are dependent on God but even the
staunchest unbeliever would love to
know there is a God they can depend
on. Even an unbeliever may pray for
rain in a drought but rain might not be
the first and most important thing for
a self-sufficient person to have an
answer to. Becoming dependent upon
God may be the greatest lesson and
encouragement of all.

Leaving God aside for a moment -
which really is not possible and only
exacerbates our problems - suffering
often reminds us that we also need
each other. It was John Dunne who
expressed in poetry those well-known
words, "No man is an island entire of
itself; every man is a piece of the
continent, a part of the main;" In
drought a tell-tale sign that a person
is not travelling well is their increasing
isolation from others. At such times
nothing could be more important than
a friend. With that in mind, the second 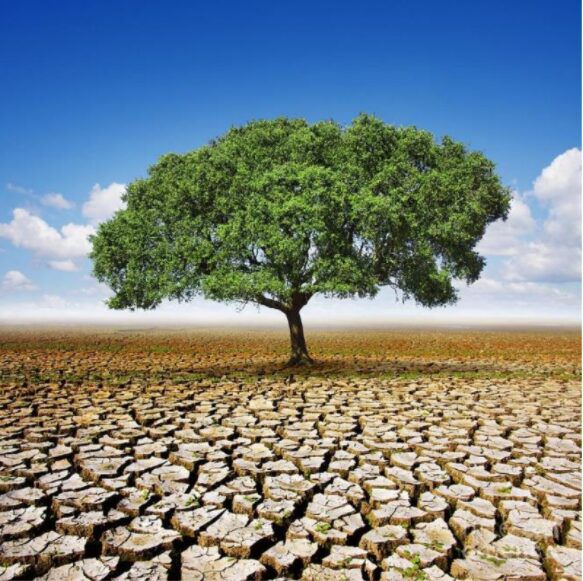 unassailable truth about Christianity is
its teaching that people should be
concerned for one another, to love
your neighbor as you love yourself. Of
course Christianity when lived properly
makes concern not a matter of mere
words but a love that issues in
practical acts of service and support.
Those who love English literature may
wish to correct my understanding of
John Dunne's poem but I am moved
to remember, "any man's death
diminishes me, because I am involved
in mankind."
A drought reminds us all that we are
dependent beings. We need God who
showed His dependability on a cross
and in His resurrection. And as those
involved in mankind we are less, we
are diminished when we suffer the
loss of one another.
Suffering itself is not all that
encouraging but when the sufferer
learns who they can depend on and
when mankind's love issues in
practical acts of kindness, even in
times of drought some of the best
things can grow.

The Lord is My Shepherd (Part 8)

Well, it has crept up on us all of a sudden. Time seems to escape our grip more and more each year as the months seem to be summed up in a few weeks that we are able to remember. Thankfully as a Christian we can say that this time of the year does have…
Read More →

The Lord is My Shepherd (Part 7)

Psalm 23 is a small passage of scripture but is so full of truth. The second half of verse 5 says, “You anoint my head with oil, my cup runs over.” So often our view of this Psalm can be seen in the light of meeting our physical needs only, however, this section of Psalm…
Read More →

The Lord is My Shepherd (Part 6)

The Lord is My Shepherd (Part 5)

The more I look at Psalm 23 the more I see its profound words. I think this is what makes the Word of God living. As the Spirit of God takes the Word of God, He can apply it to exactly where we need it in our lives. Last month we looked at the first…
Read More →

The Lord is My Shepherd (Part 4)

We continue to look at Psalm 23 and the wonderful privilege we have to be in relationship with God, where we can experience what it means to know God as our Divine Shepherd. Home Who Is Jesus? Who We Are What We Do Where We Serve Get Involved Newsletters Share A Testimony Share Your Faith…
Read More →

The Lord is My Shepherd (Part 3)

We continue to look at Psalm 23 and the wonderful privilege we have to be in relationship with God, where we can experience what it means to know God as our Divine Shepherd. Home Who Is Jesus? Who We Are What We Do Where We Serve Get Involved Newsletters Share A Testimony Share Your Faith…
Read More →

Newsletters come out once per month. Keep up to date, pray, be inspired. Connect below to receive it.

Thanks for subscribing! Please check your email for further instructions.